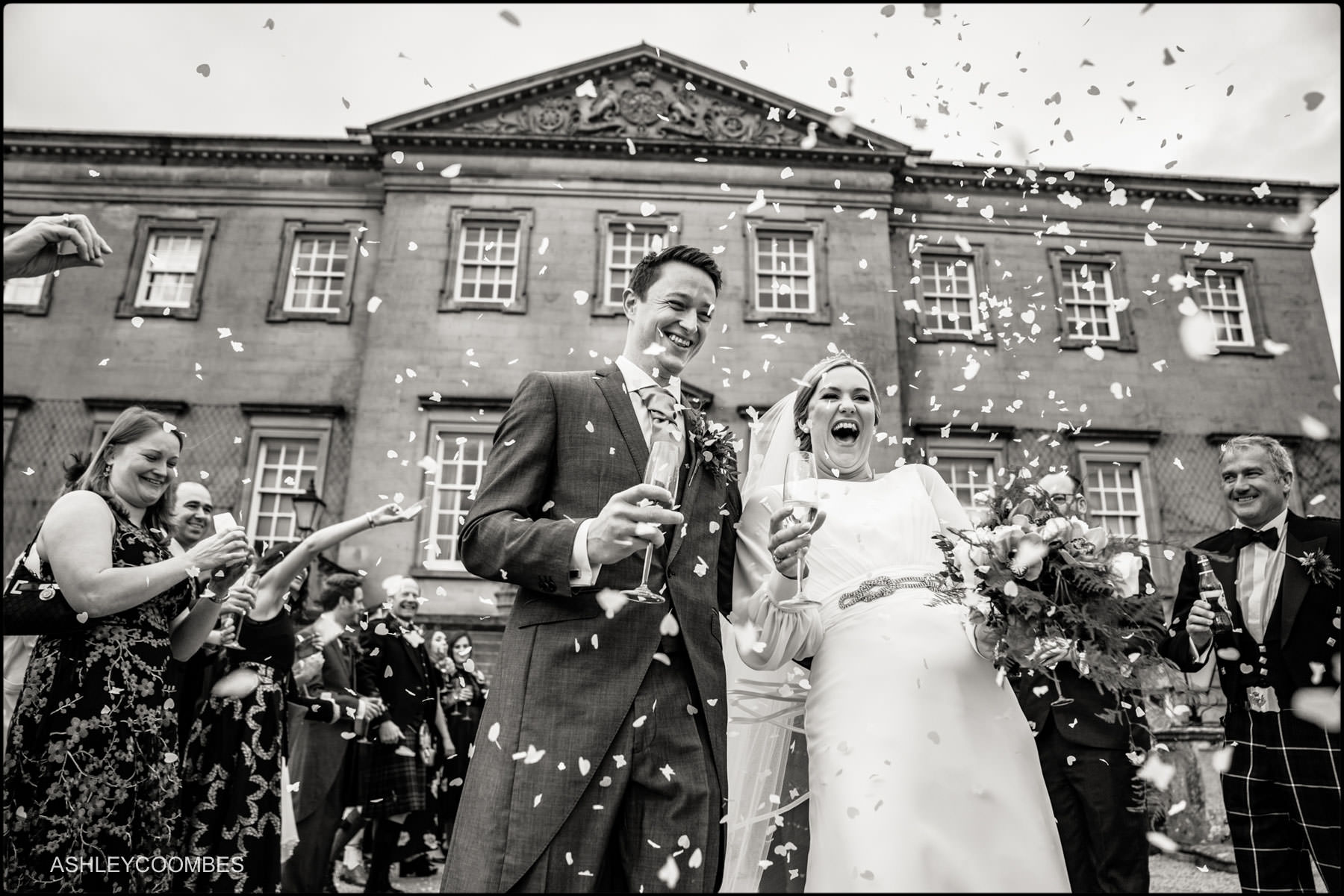 I was absolutely delighted when Catherine and Adam asked me to be their Dumfries House wedding photographer. This was the first wedding I had photographed at Dumfries House and I was very excited at the prospect of working there. The venue has been described as one of the most significant places throughout Scottish heritage. The architecture and interiors of the building along with its original 18th-century Chippendale furniture provide a truly stunning environment for a wedding photographer to work. Although I hadn’t photographed a wedding at Dumfries House before, I had been there in 2015 to photograph Prince Charles when he opened the Education Centre, so I knew about the history of the place and the extent of its treasures!

Catherine got ready in one of the upstairs rooms with her mum and bridesmaid. The sun streamed in through the sash windows creating a wonderful scene adorned with fabulous original oil paintings on the walls and an antique four-poster bed for the girls to relax on. Adam and his best man were in one of the apartments in the lodge which was about 5 minutes walk down the drive. As the taxis began to arrive with the guests, everyone gathered in the sunshine on the steps at the front of the house. It was great to look down on the excitied guests from the windows where the girls were in the final stages of getting ready…. it certainly heightened the mood for them, pointing out their friends and relations. After a wonderful ceremony in the Tapestry Room we headed outside into the sunshine for confetti and a few formal family photos with the gorgeous backdrop of Dumfries House. The drinks reception flew by, then it was downstairs to the pavilion for the evening celebrations.

A wild ceilidh and a quiet moment taking the night air

Highly entertaining speeches, a gorgeous meal and before I knew it, the party was in full swing. Everyone says it, and it has never been truer than for Catherine and Adam’s day… time flies at a wedding, and that goes for this Dumfries House wedding photographer too! The dance floor was packed after the couple’s first dance and then the ceilidh dancing created some really memorable photos. I love to get in close to the dancers with a 24mm lens as they’re spinning around or trying to remember their steps because it really gets the viewer into the action. It’s a great way to capture the mood of the moment and the atmosphere of all the fun and celebration that embodied Catherine and Adam’s Dumfries House wedding. (Have a look at the pictures towards the bottom of the page, see if you agree!) And if the opportunity presents itself, I love to ask the couple if they’d like to take a moment away from the noise and heat of the party for a quiet moment together. It’s often the first time that they’ve been alone since the previous day and it’s a great opportunity to take a pause and see how each other are feeling. I had popped out into the garden at the front of the house to set up a couple of lights beforehand for these wedding portraits and I was thrilled when the couple agreed to take a few minutes away from the action because I knew the results would be stunning!

SOME OF MY FAVOURITE PHOTOS FROM THE DAY

If you are thinking about booking me as your Dumfries House wedding photographer, please don’t hesitate to get in touch to chat through your plans and see if I have your date free.

It’s all about authentic storytelling…… genuine emotive photography not standing and posing all day.

So what did you think of my photos as Catherine & Adam's Dumfries House wedding photographer?

The History of Dumfries House

The recent history of Dumfries House contains some of it’s most uncertain years as the house and furniture were faced with being split up and auctioned until they were saved for the nation in 2007 by the Prince’s Foundation. The Palladian country house near Cumnock in Ayrshire was built in the 1750’s for William Dalrymple, 5th Earl of Dumfries by the famous architects John and Robert Adam and is noted for being one of the last such houses to retain so much of its original furniture, including pieces by Thomas Chippendale. The previous owner, the 7th Marquess of Bute had put Dumfries House up for sale for £45 million due to the cost of upkeep. The consortium who became the new owners was headed by Prince Charles and planned to renovate the estate to become self-sufficient for it’s preservation and to regenerate the local economy. The house reopened in 2008 and continues to open new areas for various uses including its perfect role as a wedding venue.

So many perfect locations for wedding photography

The house is a category A listed building, described as “an exceptionally fine and unspoilt Adam mansion by Historic Environment Scotland and the grounds are mentioned in the Inventory of Gardens and Designed Landscapes of Scotland. This is a dream location for a wedding photographer with the exquisite interiors, Palladian exterior and the grounds of the estate offering so many wonderful photo opportunities. There is the Queen Elizabeth Walled Garden, the Chinese Bridge, the Adam Bridge, an arboretum, a maze and natural woodland walks, to name just a few of the possibilities. In fact, the difficulty for a photographer is deciding where to go for pictures. However, whatever the time of day, the angle of the light, direction of wind or adventurousness of the couple, there will be a perfect spot waiting to be picked because there are so many great options to choose from. The wedding planner has an estate vehicle to hand (beautifully hoovered and spotlessly clean to preserve the dress in pristine condition) to take you to the farthest corners of the grounds.